Recently on twitter, The Associated Press was offering an electronic copy of the 1964 report of the Warren Commission.  Here is my reply:

Here is my copy, in case you wanted to see: 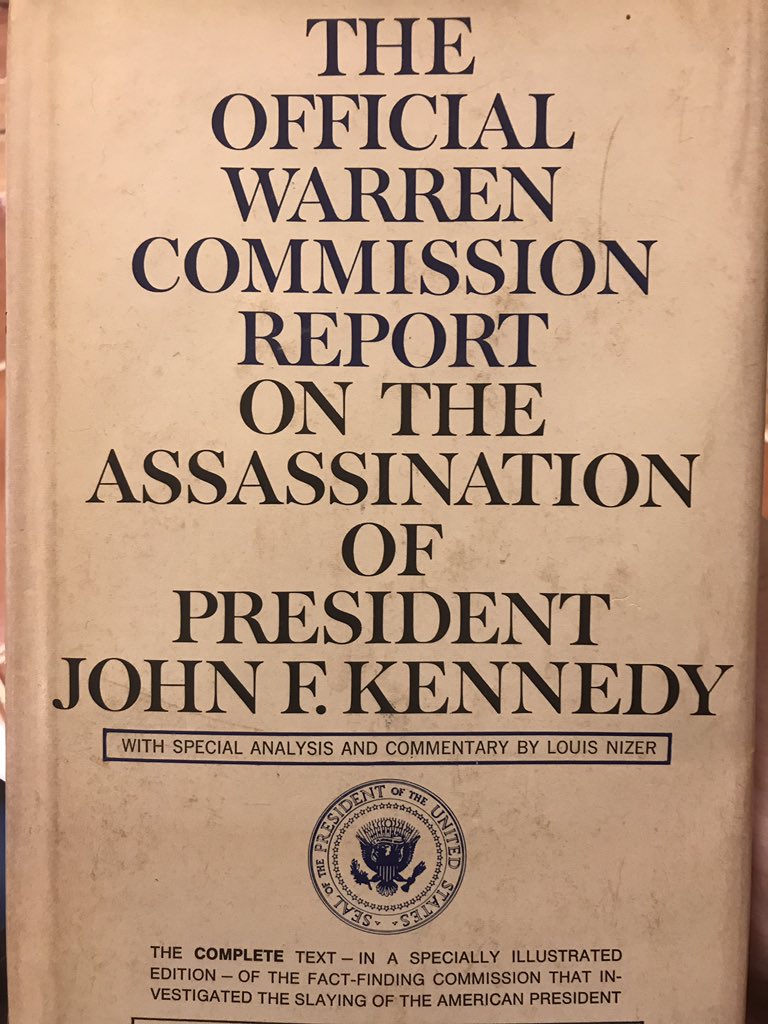 From this response, my good friend Matt (@hesthesenate) had some questions regarding my thoughts on who was behind the plot to kill the 35th President of the United States, John F. Kennedy.  Here is a transcript of that conversation:

Matt: Right now I gotta ask Brad…who do YOU think did it? Who pulled the trigger/who played/set up Oswald into doing it?

Oswald was part of abort team to stop assassination. Realized too late he was being set up.

M: Well…that’s something. What part did Jack Ruby have to play in it all? Or did he just want to kill the man who “killed the President?”

B: Not at all. Actively worked with FBI and Mafia. He was cleanup team. Had ties with Dallas PD. Oswald was supposed to die 11/22/63 as well.  But he botched the job and had to do it himself Sunday.

M: So Ruby’s ties with Dallas PD meant he got to Oswald so easily in the police station basement?

B: Exactly. You can also see him in the room at Oswald’s “press conference” and he even asked Oswald a question.

B: Yeah there are multiple witnesses who saw Oswald and Ruby together just weeks before at a club in New Orleans.

M: I don’t know what to think about it all any more.

B: For anyone who isn’t convinced about conspiracy I just say look at cause & effects. Whoever benefited from effects mostly likely caused it.

M: Who had most to gain…yeah.  And what of LBJ?

B: LBJ hated JFK. But more than that he was about to be indicted on major charges & going to be dropped from 1964 ticket. That was all fixed.

M: Is there any…even the tiniest chance that it was all Oswald or is it just too much to disregard and ignore?

B: There is always a chance. But later voice analysis showed he was telling the truth about not shooting anyone and just being a patsy.

M: But how reliable is that voice analysis?

B: Can’t give you an exact reliability but that sort of analysis has been used in criminal cases. He even said “now everyone will know who I am.” Not as someone who shot president but as someone working undercover as part of abort team.

B: In the height of the Cold War he was allowed to go to USSR and come back with no questions asked. That makes no sense.  He was also a crappy shot according to USMC and that rifle was also crappy so he could not have accurately gotten off those shots.

M: An old WW1 Italian Carcano I believe. Bolt-action too?

B: WWII and yes bolt action. His had to be manually loaded after each shot and had to be resighted. Also the rifle changed too.  The original one they found was a German Mauser but magically changed into the Mannlicher-Carcanno.

M: Look at that smug git behind.  Who was the mastermind?

B: Allen Dulles. With LBJ and friends as the biggest beneficiaries.

From there we went on to chat about the Zapruder film, and you can find the entire conversation on my twitter page.  Thank you so much for the questions, Matt.  If you have any questions, please leave me a comment.  And as always, I invite you to check out my Patreon page.  Thank you for reading.

In 1974, former CIA special assistant Victor Marchetti wrote a controversial book entitled The CIA and the Cult of Intelligence.  Here is what he had to say about the nefarious dealings of the organization:

There exists in our nation today a powerful and dangerous secret cult — the cult of intelligence. Its holy men are the clandestine professionals of the Central Intelligence Agency. Its patrons and protectors are the highest officials of the federal government. Its membership, extending far beyond governmental circles, reaches into the power centers of industry, commerce, finance, and labor. Its friends are many in the areas of important public influence — the academic world and the communications media. The cult of intelligence is a secret fraternity of the American political aristocracy. The purpose of the cult is to further the foreign policies of the U.S. government by covert and usually illegal means, while at the same time containing the spread of its avowed enemy, communism. Traditionally, the cult’s hope has been to foster a world order in which America would reign supreme, the unchallenged international leader. Today, however, that dream stands tarnished by time and frequent failures. Thus, the cult’s objectives are now less grandiose, but no less disturbing. It seeks largely to advance America’s self-appointed role as the dominant arbiter of social, economic, and political change in the awakening regions of Asia, Africa, and Latin America. And its worldwide war against communism has to some extent been reduced to a covert struggle to maintain a self-serving stability in the Third World, using whatever clandestine methods are available.”

With many of the JFK files still being withheld, it appears this organization is still up to its old tricks.

While rotting away in a Texas jail, Jack Ruby, who murdered Lee Harvey Oswald to silence a man who knew too much, begged and pleaded Chief Justice Earl Warren to take him to Washington, D.C. so the world can finally know the truth about the JFK assassination.  Ruby knew full well he would never be able to safely speak his mind while in Texas.  Strangely enough, Justice Warren denied this request.  While Warren met with Ruby in 1964, this is what Ruby had to say about the conspiracy:

“I want to say this to you…a whole new form of government is going to take over our country, and I know I won’t live to see you another time.”

Watch in this rare and chilling video as Ruby explains how vast the JFK conspiracy was, and how far up in went.

And in case you were wondering just how easy it was for Ruby to murder Oswald in a room full of police officers, take a look.

Still think there was no conspiracy?  Leave me a comment and let me know what you think, and please share this article if you enjoyed it.

Mac Wallace was a close associate of LBJ.  By “associate,” what I mean is: hitman.  There is substantial evidence that links multiple murders to LBJ by way of Mac Wallace.  Author Roger Stone makes the claim that Mac Wallace may well have been one of the shooters in Dealey Plaza on 11/22/63.  You will also notice in this video that Brown & Root/KBR/Halliburton are briefly mentioned.  To read about my thoughts on that matter, please follow the following link: https://medium.com/@StarWarsChief/jfk-9-11-whats-the-connection-238a38f39b47

Do you remember the character “Mr. X” from the film JFK?  That character was based off retired USAF Colonel L. Fletcher Prouty.  COL Prouty worked under General Ed Landsdale who worked with CIA specializing in psychological operations.  In this video, Prouty discusses the mysterious “Three Tramps” that were detained in Dealey Plaza on the day of the JFK assassination.  The kicker?  Ed Landsdale may have been there too.

Due to a law passed 25 years ago, long classified documents related to the JFK assassination are due to be released this week on Oct. 26.  As expected, President Trump is taking full credit for it:

Subject to the receipt of further information, I will be allowing, as President, the long blocked and classified JFK FILES to be opened.

“Experts” like Gerald Posner do not feel like the release of these documents will be a threat to national security.  For that to be true, one (or both) of two things must be true:

Although I wholeheartedly believe the latter is true, I believe the former will be more the case.  If Trump does let anything get released, it will not be nearly enough to damage the power structure.

That being said, some folks have asked me if I think this release will have any impact on my upcoming novel Saving Camelot.  The short answer is: nope.  As I’ve said, I do not feel we will ever truly know everything about the murder of the 35th President of the United States, especially those responsible for it.

I’d love to hear your thoughts on this.  Please watch the following video, share this article and leave me a comment!

You ever had that nagging feeling that something just doesn’t seem right?  That something is just…off?  And not like maybe you just left the oven on or forgot to feed the cats, but something is fundamentally wrong with the state of things in your life or the world as a whole.  For many years I have felt our world has not been right since JFK was brutally murdered in broad daylight November 22, 1963.  Almost like we are living in an alternate reality.

It was that relentless thought that has driven me to write Saving Camelot.  So many things changed after John Kennedy was killed.  How would things be different if he had lived?  And who was ultimately responsible for his death.  What did they have to gain?  Countless non-fiction books have been written on this matter, but from time to time, I believe sometimes it’s best to reveal truth through fiction.

Please join me as our protagonist Fitz struggles with his own past while trying to stop those who would alter history as we know it.